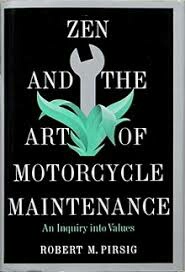 Title: Zen and the Art of Motorcycle Maintenance:

An Inquiry into Values

When I first picked the book to read, I was unaware of its cult status. I had a vague idea of it being popular and being high brow but I was totally unprepared for a very rewarding experience of delving into a philosophical ‘Inquiry into Values’.

The term ‘philosophy’ intimidates, yet I found the book to be engaging and thought provoking, reading wide eyed and following the author’s discourses all through his journey, as much on the road as through the mind.

Journeys invariably lead to discoveries, many times inner. The author of the book starts off on a road trip on his motorcycle with his son, Chris and two friends, John and Sylvia. They travel through the country to reach the University of Bozeman in Montana, where he used to teach years ago.

The book is autobiographical and many real life incidents turn up in the pages. Through the long days traversing the countryside, Pirsig helps pass the time by indulging in a ‘chautauqua’, which is a long discourse. Pirsig talks of motorcycles, the impact of technology and people’s reaction to it, the nature of logic, exploring eastern mysticism before finally alighting on quality, the rumination of which is the pivotal point of the book.

Pirsig thinks deeply of Chris and their sometimes awkward relationship, but because he is traveling to a place which figured prominently in his past, the journey brings to the fore troubled memories to Chris as well. Their relationship wears a mantle of poignancy because we discover that the demons that his son battles are perhaps not very different from those of his father.

Pirsig explores his ideas through the Western Rational mode; there is Aristotelian logic and Euclidean logic and an exploration of Eastern mystical philosophy. The book is a lot of philosophy interwoven with his memoir. The autobiographical elements are unmistakable; Pirsig himself had been institutionalised and forcibly given electroshock therapy. His son Chris also later had to be institutionalised.

Pirsig muses on a number of concepts as well as talks much about Phaedrus who is really a shadowy and eccentric character. Over so many pages, it is Phaedrus’ career, his philosophy, his disregard for authority and creative approach that makes the philosophical chautauqua even more interesting.

Phaedrus turns out to be Pirsig’s alter ego, as he was before his mental illness. The reader watches with horror and a growing sense of unease when Phaedrus comes back to claim Pirsig’s mind as the trip takes them closer to their destination.

Pirsig wants to unify the subjective and the objective approach. The focus of their reconciliation is Quality which he later on equates with the Tao or Zen.

The book propounds the Metaphysics of Quality which is thought provoking not for philosophers alone. Read it for a peek into the mind of a genius.