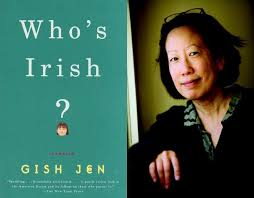 Who’s Irish is a collection of stories by the Chinese American author, Gish Jen. Here, I am talking only of the eponymous story in the collection, which is a look at the conflict between generations, in a Chinese immigrant family.

The story is narrated by an elderly Chinese woman, an immigrant living in the United States. She babysits her grand daughter, Sophie, who is completely American in her ways. She tries to discipline her, against her own daughter’s wishes and in the process is estranged from her family. It is through a disagreement with her daughter and her son in law that she is supported and comes closer to the people she has derided till now.

The primary theme of this short story is the East-West cultural gap and the immigrant’s experience. Against this backdrop are set the personal prejudices of one woman that leads her to misunderstand people and their ways.

This story is evocative of the confusion of people who have left their homeland to make foreign lands their homes. It is a parallel of another book that I am reading, Amy Tan’s, The Joy Luck Club. There is such a divide between the first generation immigrants and their children that they cannot understand each other well enough.

The strength of the story lies in its brevity. There are little ways in which the narrator compares her own life and character with those of her children and her son-in-law’s.
family.

A classic. Short and breezy, it tugs at your heart strings with its portraiture of human emotions and the complicated relationships we have with our families.