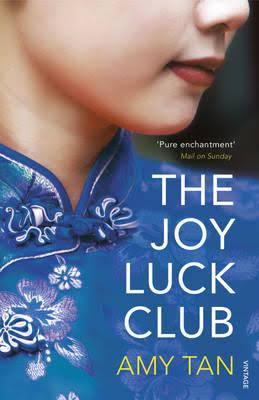 The Joy Luck Club is Amy Tan’s first novel; a collection of enthralling vignettes that focus on the conflicting and complicated emotions in relationships.

Essentially, the book is about the Chinese immigration experience to America and the divide between generations.

Of Mothers and Daughters

The book opens in a meeting of the curiously named ‘Joy Luck Club’. The club has four Chinese families, immigrants to America after 1949. They have been meeting for a game of Mah Jong, for eating and gossiping, for the past many years.

This meeting is different, because it is the first meeting after the death of one of the women. Her daughter, Jing-mei Woo is called upon to complete the fourth end of the table.

All the relationships between the mothers and daughters are characterised by a deep strife and a gaping chasm in understanding. There is plenty of resentment and even ways in which they belittle and undermine each other.

The fathers in the book are shadowy figures and the husbands/boyfriends of the daughters are manipulative, mean people so that the book becomes largely a feminine perspective.

A knowledge of Mah-jong throws light on the curious structure of the book. There are 4 pairs of protagonists, mothers and daughters. There are four parts to the book and each part has four stories. The first and the last parts are from the perspective of the mothers where they reminesce of their early lives and the misfortunes they had to endure. These parts are completely steeped in the Chinese culture.

The second and the third parts are from the perspectives of the daughters, talking of their childhood, the conflict with their mothers because of a deep chasm between the American culture and their mothers’ Chinese upbringing. They also talk of their adult lives, their own failed marriages and the dawning of the understanding with their mothers.

The narrative is very rich and the language is ornamental. The dream like sequences are so fantastical in nature, that the reality of the Chinese lives seems difficult to hold on to. The imagery is sometimes so elaborate as to be confusing.

There are many stories, many voices (8 in all) and it is hard to differentiate between them or to remember the backstory of the characters. There is also an underlying thread of sameness which makes it difficult to pin the stories to the characters.

The chapters are complete stories in themselves, beautiful vignettes that somehow fail to stitch together to form a narrative.

The Joy Luck Club can be summarised as the immigrant experience and the mother daughter conflict. It is a series of stories that are a peek into the Chinese way of life and it’s juxtaposition with the American culture.