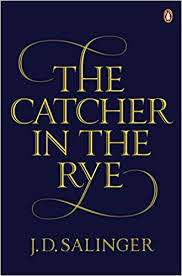 Title: The Catcher in the Rye

‘The Catcher in the Rye’ is a classic coming of age book, featuring teenage angst and un expected maturity.

With its dry wit and dark humour, the book delves deep into the psyche of a young adult who is trying to find a meaning and purpose in his life.

The title of this popular book published first in 1951 by J.D.Salinger sounded a little mysterious. So did the book cover, all in black, the words curving invitingly, and no image to break the monotony or to impress upon the mind any catcher.

But I picked the book because a glance at the words inside opened up a new and different world. Here was an adolescent making sense of the world that inextricably belonged to adults. The adults make the rules, they understand things in a way that is incomprehensible to the protagonist, Holden Caulfield.

The book uncovers teenage angst, of coming to terms with the world, of trying to understand the motives of people and of following the rules which to the young mind means compromising on authenticity or principals.

At 16, going on to 17, Holden cannot understand old age; he is unable to comprehend how a person is able to live contentedly when he has difficulty bending or even being accurate with throwing things on beds, which are ‘just a few inches’ away. He cannot understand mortality and his brother’s death brings on an outburst of violence that prompts a visit to a psychoanalyst. Holden, then struggles through school, three schools in fact, till that time in the narrative. He is talented, as is evident from his mastery of language in school and composition. He lives a typical life of a teenager in a boarding school but his principals are high; he often muses on the loss of innocence in adults. He is incredibly gentle around little children, in fact, his love for his kid sister Phoebe alters the course of his rash actions. He listens to her and her opinion matters to her. Like a youngster, he is observant when it comes to people and their behaviour.

Holden is almost a misfit in the society. He finds it difficult to get along with people. He is rudderless and direction less. He is moving towards an ‘abyss’ as his professor puts it. Yet, Holden is asked to introspect and to understand that he is not the only one who feels lost in the world.

The Voice, undoubtedly. It is the unique teenage talk, a mix of colloquial phrases and of profanity that make Holden who he is.

The direct way of addressing the reader and the thoughts running through his head, spoken out aloud were the things that drew me to the book.

An exquisite read about an adolescent rebel, trying to make sense of the world around him.