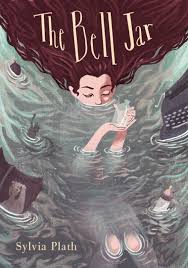 “If neurotic is wanting two mutually
exclusive things at one and the same time, then I’m neurotic as hell. I’ll be flying back and
forth between one mutually exclusive thing and another for the rest of my days.”

What a tour de force this book is, I felt as I turned over the last page of the book. Reading this extraordinary book with strong feminist themes and wonderfully evocative language seemed like a rite of passage to me.

The Bell Jar was Sylvia Plath’s first and only book. She was an accomplished writer and poet by the time this book came out in 1963. She wrote under a pen name because the book was autobiographical and the characters modeled on the people she had known in her life. It was also controversial because it tackled themes like gender equality, freedom for women in terms of career choices and sexuality. In addition, it addressed mental health and suicide and the methods used to cure mentally unstable people at that time.

Esther Greenwood seems to have a charmed life at 19. Intelligent, hardworking and talented, she goes through college on scholarship and wins a writing job and a glamorous lifestyle in New York for a month. She has a doctor boyfriend tucked away in a sanatorium, recovering from TB. But when Buddy Willard asks Esther to marry her, he also confesses to having had an affair with a waitress the summer before.

Esther is repulsed, not just at the idea of Buddy being involved with another woman but also by the fact that men were free to choose while women were resigned to a life of ‘purity’. Esther feels revolted at the idea of marriage and the dull domesticity it brings for women. She is appalled at how many of the married women had a large number of children and how they spent their lives rearing them and doing not much else.

Back home after the stint in New York, Esther’s emotions unravel and she slips into depression. In spite of medical intervention, she does not improve and tries to kill herself.

Esther then goes from doctor to doctor and is supported in her treatment by a benefactress. On her way to recovery, Esther explores her own values and desires and how the society has different norms for men and women.

The Bell Jar is an epic work in feminism and in ‘what women really want’. It explores the themes of equal opportunity, of sexual orientation and exploration, the stigma of mental illness and of a sense of strong individuality in women.

The language is very beautiful, very evocative. When Plath describes things like insomnia or even the feeling of slipping away or dying, it is like reading poetry.

A classic in the true sense; read The Bell Jar for the genius of Sylvia Plath and her way with words, for the boldness with which she confronts the norms and expectations of society.