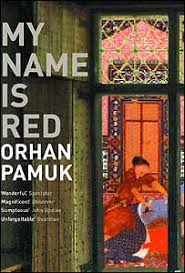 Title: My Name is Red

Painting is the silence of thought and the music of sight.

In reading this book, I was struck by the cornucopia of images, colours, illustrations.

Orhan Pamuk, the recipient of the 2006 Nobel Prize in Literature has written this amazing historical novel and set in the time of the Ottoman Empire in the 16th century. It was written in 1998 in Turkish and translated to English in 2001.

The book has miniature painters as the main characters and it talks in detail about the techniques used in painting, the philosophy behind the paintings and the psyche and the lifestyle of the painters themselves. There are innumerable subjects and illustrations that are discussed in vivid detail.

One of the most exciting feature of the book is that each chapter has a different narrator. To change skins and perspectives often, the reader is kept on his toes. The narrators range from the main characters to corpses, horses, Satan and even inanimate objects like coins and trees.

The book starts with the murder of one of the miniaturists. The unraveling of the mystery behind the murder takes up an important part of the book. Interwoven with the intrigue is a delightful romance. It veers towards passion with a thread of practicality running through it. The female characters are fleshed out most wonderfully-all too human. There is love, there is an awareness of worldly responsibilities and finally Shekure, the main female protagonist realises that her love for her children is different and more fulfilling than her love for her husband Black, who has waited to wed her for twelve long years.

The Jewish clothier, Esther is a wonder to understand. Compassionate yet shrewd, she brings colour to the drab, snowy winter days.

Through miniature paintings, Orhan Pamuk brings forth the east west conflict in the nature of panting styles.

As Pamuk’s official website states,the book is about “death, art, love, marriage and happiness as well as a requiem for the forgotten beauties of pictorial art”.

An absolute delight, not to be rushed through, with each image and brush stroke savoured!