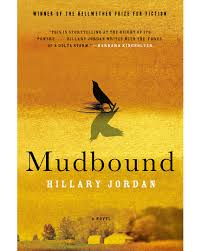 I came to this book through the movie adaptation, which had a few Academy nominations. Forceful narratives make for good films and I looked forward to this acclaimed debut work, set in the Mississippi Delta, addressing racism, among other things.

Mudbound, the farm, is in the rich, fertile land of Mississippi where cotton is harvested. The mud is overwhelming, threatening to suck into it the lives and dreams of the people who inhabit it. Mudbound seems to be a study of contrasts, of reflections and the mirror it holds upto us and our moral and ethical choices.

Laura, the city bred girl is forced to move to her husband Henry’s rural Mississippi farm. In the 1940s, it is a very different and difficult life for her but she tries to do her best to adjust and to include the lives that intersects hers, especially those of Jacksons, their coloured sharecroppers. Her charming soldier brother in law, Jamie joins the household at the same time, Ronsel, the army veteran and a person of colour, comes back to his own parents, the Jacksons. The ways their lives come together and the unlikely alliance that Jamie and Ronsel form, affecting each others’ lives indelibly and forever is both heartbreaking and shocking.

Mudbound is narrated in a few voices, all of whom are very different individuals. There are two farmers, dedicated to their land, two mothers, fierce and protective in their own ways and two soldiers, returned from the second world war, with their private demons.

It is a strong story, very visual and liable to make you look at the unfortunate choices of the characters and commiserate with them.
In spite of the many points of view, the narrative is uncomplicated, so that you can see the bare bones of the story and understand exactly how the characters grow through their tribulations.

Foreshadowing is used very effectively through the book and it helps to maintain the interest.

Mudbound is an eviscerating account of racial prejudice and the dilemmas that people face, when confronted with difficult choices.

Read for a strong story and a perspective on how people are a product of their place and time.